The easYgen-3000 Series is able to control up to 32 gensets connected in a network with automatic sequencing.

The easYgen-3000 Series is available in two variants, the easYgen-3100 for cabinet back panel installation, and the easYgen-3200 with graphical color display and soft keys for front panel mounting.

FlexApp(TM) – This feature provides the tools to easily configure the number of operated breakers: None, GCB, GCB and MCB.

LogicsManager(TM) – Woodward’s LogicsManager enables to change the operation sequences and adapt them to specific needs. The LogicsManager accomplishes this by monitoring a range of measuring values and internal states, which are combined logically with Boolean operators and programmable timers. This enables to create and/or modify control and relay functions.

FlexIn(TM) – The analog inputs are configurable to operate with VDO, resistive, and/or 0 to 20 mA senders.

Flexible Outputs – Speed and voltage bias outputs are configurable to function with all speed governors and voltage regulators. The outputs can also be used as freely scalable outputs (e.g. for driving external meters). 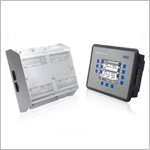