Two models of this type amplifier are available. The large 7.25 inch (184 mm) and the smaller 5.25 inch (133 mm) models are basically the same except for the diameter of their servo pistons. The 7.25 inch model is capable of developing about twice the force and over double the work capacity of the 5.25 inch model under the same operating conditions. Either size amplifier may operate as single-acting or differential (double-acting). The single-acting is pressure actuated in the increase fuel direction and spring loaded in the decrease fuel direction. Pressure oil moves the differential servo in both increase and decrease directions. The differential amplifier normally has a light return spring to ensure closing the valve during shutdown.

The EG-3P actuator is an integral part of this amplifier with factory installed hydraulic and electrical connections. The actuator is equipped with an oil motor for rotating the pilot valve bushing to reduce static friction. An internal orifice is supplied for regulating the oil flow to the motor. The actuator also has a maximum stop adjustment to limit the output shaft position, thereby limiting the stroke of the amplifier servo.

The amplifier has two adjustments used for matching the level and range of the servo with that of the actuator output shaft.

An additional option is a port for starting oil which provides a means of opening the fuel or steam valve prior to start-up. In all applications where starting oil is required, a three-way valve (not supplied by Woodward) must be connected to the starting oil port. 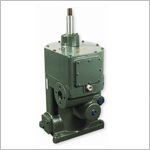