Backup speed control is accomplished by the simultaneous operation of hydro-mechanical (PGA) and electronic (EG) governing systems. To achieve backup control, the electronic system must be reverse-acting (an increase in fuel is called for by a reduction in current to the actuator portion of the PGA-EG).

Should the electronic signal to the PGA-EG drop to 0, due to some problem in the system, the electric actuator will call for an increased fuel position above the setting of the mechanical governor. At this point, the mechanical speed setting is lower and the ballhead controls the engine-fuel setting.

Although the speed will be slightly higher under mechanical control, no gross overspeed or shutdown occurs due to a loss in signal from the electronic control.

Direct-acting PGA-EG controls are available. These units will go to minimum fuel on loss of electronic control signal. 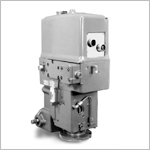